Negatives: it was hot! ‘jump’ photo queue was a bit of a disaster

As the run was late afternoon, my sis and I caught the red eye from Glasgow to London, Gatwick on Sunday morning. We had breakfast at the airport, but as we were flying British Airways, we also had breakfast on the flight: result!

Fortunately, we’re pretty comfortable with travelling around London, and as the race was at Wembley we knew exactly where we were going, as we’ve been there several times for the NFL games. We headed straight to our hotel at Wembley, had a 15 minute chill-out while they prepped our room, then we took our time getting changed and getting excited for the run! Here’s the view from the hotel room:

We were able to see others heading towards the start at around 2pm, so we grabbed our water, and headed around the stadium. As we walked around, we could see the crowds beginning to gather in the muster area:

The facilities at the start were great: loads of portaloos, clearly marked information stands, merchandise stalls, check in desks, etc. We headed for the sunglasses pick up, as we were getting them as freebies as part of a LivingSocial deal: there was no queue, and the staff were lovely and friendly. As the event is sponsored by Dulux, there was an opportunity to have your picture taken with the Dulux dog!

In the muster area itself, there was a ‘start’ line, but the actual start itself was under the Wembley arch. Here’s some pics of the pre-run build up in the muster: 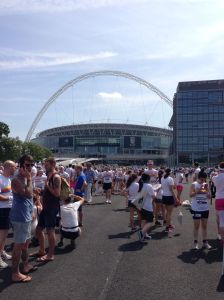 The MC was pretty good, keeping the crowd entertained and trying to keep them distracted in the heat! Here we are, before the run: 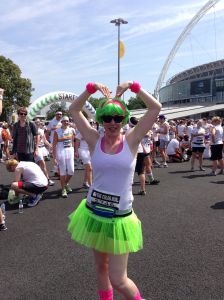 That’s my sad attempt at a MoBot….

After baking in the sun for about 45 minutes, the crowd moved towards the actual start. The MC told us that we’d be running in waves, with about 7 minutes in between each group. As we were pretty near the front, we were in the second group, which we were very grateful for, as there were apparently 15,000 runners! I would not have wanted to stand about for one of the later groups! 😮

The start itself was really good. The staff were throwing freebies into the crowd, Nicki Minaj (yeah, I know) was being played and runners were jumping around with excitement! 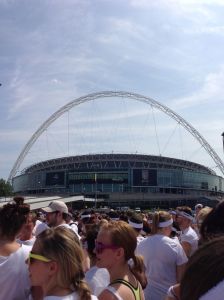 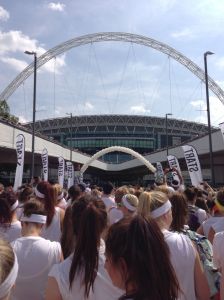 It was a great way to start the race: spectators were able to line the walkways, and stand on the bridge above the runners: they were waving, taking pics and enjoying it as much as the runners!

We started off by running pretty slowly: as you can see, the crowd was pretty tightly packed, so the first k was more of a walk/shuffle. I wondered why so many people had their phones and cameras inside plastic pouches, or wrapped in cling film: as I saw the first k marker in the distance I realised why:

I could see a cloud of pink shimmering in the sky, and I had an instant realisation- if I keep my phone out, it’ll be clogged up with dry paint! Doh! So, I’m afraid that this is the only picture I took en route!

Running into the arch was so much fun: the volunteers at each side of the road were having a great time, using squirty bottles to cover the runners in colour! As it was warm, dry and humid, the paint was almost hanging in the air, so as you ran through the cloud of colour, it was a little difficult to breathe, but no real problem at all. My legs were covered in pink!

My sis realised that, despite being 15 years younger than me, she was definitely not able to match my slow running (that’s saying something, huh?!) so we did a walk/jog for the rest of the course. That as actually ideal, as we got to really enjoy the event, without pushing for a time. We could soak up the fun, we weren’t pushing past families or kids, we could talk and just make the most of it.

At the purple marker, a lady hit me full in the face with purple paint, so in all of my ‘after’ pics I look like I have a purple beard! 😮

The race ended just outside Wembley stadium, and we could hear the music, and the DJ, but being in the second wave, it was still pretty quiet. We were handed bottled water, and a VitaCoco drink, which were both very welcome!

We made our way to the crowd, and started to queue to get our photos done doing the Color Run ‘jump’ but the queue rope was too short for the number of people waiting, and no one was supervising the queue, so it dissolved into chaos. Instead of getting upset or bothered with people jumping into the queue, we just left it, and just as we started to head to the merchandise stalls, we heard them call all tutu wearers to the stage! I grabbed my sis’ hand, and dragged her behind the barrier, where all of our fellow tutu wearers were dancing and jumping about to Katy Perry’s Call Me Maybe:

I decided to take a quick pic of my sis and I here, and we were photobombed. Possibly the best photobomb I’ve seen: 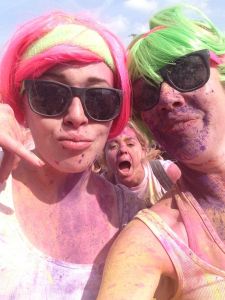 Well done that girl! Love it!

Here’s our after pics: 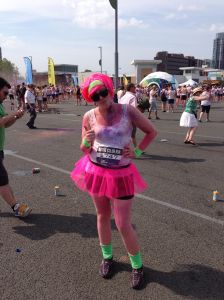 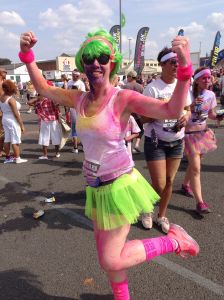 After we had finished jumping about, we went back into the crowd for a bit, and did the finish line colour cloud: we had yellow paint for the end.

We then headed to the merchandise stall, and I treated myself to some socks, which are pretty cool:

Elsewhere in the finish area, there was a guy, soaking everyone with a hose, and there were plenty of food stalls, first aid staff, and volunteers for anyone needing help at the end.

We headed back to the hotel, where we got some really weird looks, sitting at the bar, enjoying a beer: 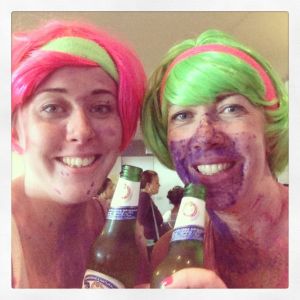 As we were heading out into London, we headed for showers, and clean clothes! On our way out that evening, we could see the aftermath! 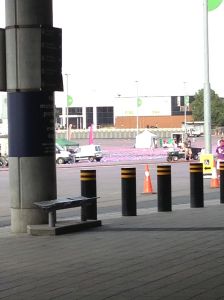 My stats: No official time, but we finished in around 39 minutes

The Medal: None, but that’s OK!

Goody Bag: None, but water and VitaCoco was available

T-shirt: I love the shirt, but as it’s cotton I won’t be wearing it for running. I didn’t run the race in it. I’ll be wearing the sweatband, though!

I’ll be planning on doing more than one of these next year: I’ve heard that there’ll be one in Glasgow in 2014- cannot wait! 😀