Yip, you read that correctly. In two weeks, it will all be over. Hopefully I’ll be a Spartan Warrior 💪🏻

My training has been pretty solid this week, and I’m almost back to full fitness, while accepting that there will be some obstacles I’ll really struggle with. C’est la Vie.

Last Monday I worked really hard at WAR, pushing myself during the HIIT sections to really get the most out of it. We had a new routine, and boy did I feel it on Tuesday! Jacqui provided me with yet more invaluable techniques on Monday night using resistance bands, so I’ve been building them in to my training this week. Thanks as ever, Jacqui!

Tuesday was a good day for training, I managed a Doubler by getting in a 5k run along Helensburgh seafront followed by an hour of PiYo stretch and Flow. I needed it after the previous evening’s hard work!

I made it along to Jog Scotland on Wednesday and my intention was to drop back and do an easier run. However I just can’t resist the glen road, so I went with the Improvers 1 group for a little hill run instead. And I’m glad I did- it was a fab run!

Thursday night’s PiYo class was cancelled so I did some cross training but kept it quite light. It was good to mix things up a bit. I then had a rest day on Friday, followed by a busy Saturday that left little time for structured exercise. I did do a good bit of weeding so my shoulders got a workout and I did plenty of squats, that’s for sure! I’m classing that as functional training 😉

Tonight, we had no WAR class due to last minute cancellations but instead I ran and did some strength training. Go me!

All in all, I still have mixed feelings about the Spartan Sprint- I’m really looking forward to taking on such a different type of event and testing myself, but I’m a little anxious about some of the obstacles. I’m sure I’ll manage to drag myself over and under some stuff and I’ll have to rely on TheWelshWookie and others to shove or drag me over and through others!

We are off to London later this week, so I’ll be trying to get as much training in during this early part of the week. Make the most of it while I can! 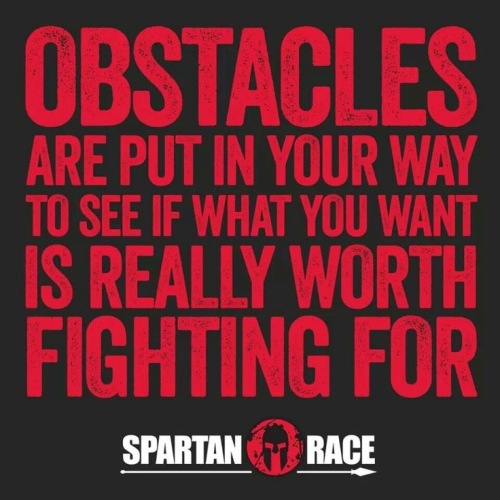 Have a brilliant week!