The GB Relay is a world record breaking attempt for the longest continual running relay. Each participant signs up for a stage which vary in length, but average out at around 10K. There is a baton containing a GPS unit transferred from runner to runner, and everyone is responsible for their own safety, checking out their route, etc. As it isn’t a race, and each stage has a start and finish time, everyone is encouraged to run 10 minute miles.

The first major difference for @TheWelshWookie and I in participating in this was the time of our stage: we were due to run at 6.19pm, which meant no early rise, and no need to pack the night before. We had super quality relay T shirts, which were personalised: 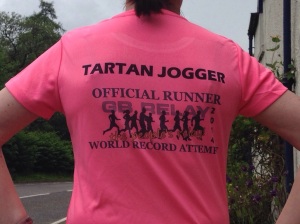 So, on Sunday, we headed first to Oban, did some shopping, then onto Strath of Appin, which was our end point. We parked the car, and got ready: I gave myself a thorough coating of both suncream and midge repellent: I needed both! As we had no support available due to a family event, we had to walk to the start point of our stage: the village of Duror, in the Highlands, 8 miles away.

In the week leading up to the event, I’d been in touch with the runners on either side of our stage to agree handover locations and swap contact numbers, to keep everyone updated on progress. As @TheWookie and I were a couple of miles into our walk, we heard that the relay was running about an hour behind schedule 😦

It was too late for us to turn back and wait in the car, so we continued on, enjoying the scenery, and checking out the route itself. Fortunately, most of it could be run along the cycle path, with only the two miles immediately from Duror having to be run on the main road. The route was lovely: 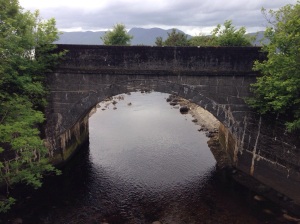 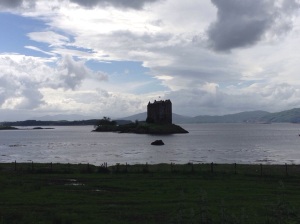 A team from Dunoon Hill Runners were running the two stages before us, including the hilly section over Glencoe. When they handed over to Ian, who was handing over to us, they got changed and drove to meet us in Duror, to collect Ian when he arrived. It was lovely to meet Kirsty again, and also to meet Jean and Angela. They had managed to pull back some of the time deficit, and so we weren’t delayed for quite an hour!

Before we knew it, Ian was approaching, and it was time for us to run!

Ian passed the GPS tracker to @TheWelshWookie, and we were off! 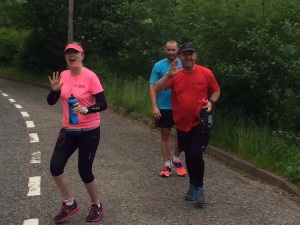 The tracker was a small box with a handle, but was quite light. It was a little awkward to carry, but not as bad as I expected. The icky part was the handle and velcro wrist strap that was soaked in a week’s worth of runner’s sweat! Eeew! We were warned not to drop the tracker, or let it touch the ground because that would nullify the record attempt.

Given that we were trying to run a little fast to make up time, and to get off the road section as soon as possible, the first two miles flew by. When we reached the start of mile 3, I thought we’d only gone one mile! Yay!

I really enjoyed running the middle part of the stage: it was great that we’d just walked it in reverse, as I was able to check of landmarks as we saw them.

At around mile 5, the walk around Oban, the walk to Duror and the slightly faster-than-usual pace took its toll on TheWelshWookie. His recurring knee problem made an unwelcome appearance, and for the next mile our pace slowed. At the six mile marker, we made the decision that I should run on, so that @TheWookie could run at a slower pace and not aggravate his knee further. We also wanted to finish on time, so I ran on ahead.

For the final mile, I struggled a little myself. I was relishing the opportunity to run on tired legs, and I reminded myself that this would stand me in good stead with my marathon training 😉

The final quarter mile is a long, flat stretch, and I could see Fee and the girls from Inveraray Jog Scotland, who I was handing the baton on to. They had their bright yellow t-shirts, which helped motivate me  in the final section. As they saw that I was on my own, they asked where my husband was: my first reaction was who? 😉 Oh, yeah, that’s right, I’m married! 🙂 So I said I’d ditched him due to injury 😉

I passed on the baton, along with the message not to let it touch the ground, and off they ran!

@TheWelshWookie was only a few minutes behind, and ran most of the last mile, which is a good sign for his knee. We rehydrated, then jumped in the car and drove to Oban where we celebrated with fish and chips 😀 Yum! The sunset was spectacular, but I didn’t get a good shot of it. The sky ahead was red, with a neon-looking rainbow, I’ve never seen one like that before. This pic does not do the vibrant colours justice:

Here’s a map of our route:

There is no medal, and no goodie bag, but there is a feeling of accomplishment, participation and that you’re part of something, which gives this event a really special feeling.

The relay is still underway, and if all goes well is due to finish on 2nd July. I can’t wait to hear if we are record breakers!

Today’s Hal Higdon marathon training called for 3 miles. It was great to get out there. I sported my Great Run t-shirt for the first time 🙂

As we headed to the harbour, it was sunny and a little warm, but by the time we got to the end of the first mile it was chucking down! But, it actually felt really good to run in the rain.

When I uploaded my Nike+ SportWatch data, I saw that the Nike+ running site has had a facelift, and I like it! 😀

I was really pleased with the pace tonight.

I also received an email today from the organisers of the GB Relay. It contained a link to the contact details of participants, so I’ve emailed the people on either side of our stage, so that we can arrange the baton handover. Hopefully it will all go very smoothly!

Did you run in sunshine or rain today?

Welcome to my 300th blog post! And, I had to  celebrate by posting a picture of fellow Scot Gerard Butler as a Spartan ❤

This probably reminded him of the weather at home:

Anyone out there doing a Spartan race this year?

If so, this might be the workout for you, courtesy of Men’s Health 🙂

So, with FREE STAGES up for grabs, now might well be the time for you and your team to bag a few stages!

Well, @TheWelshWookie and I were hoping to run in the inaugural Rock ‘n’ Roll Liverpool half marathon next weekend. But, plans have changed, so we’ll have to pass on it this year.

So, that means that our next run will be as part of the Great British Relay 2014 on 8th June 🙂

The aim is to break the world record for the longest continuous relay around the coast of Britain. Did someone say record attempt? We’re in!

The British coast has been split into 594 stages, and the run is done continuously, 24 hours a day, during June and July 2014.

@TheWelshWookie and I will be running stage 138, from Duror to Strath of Appin Primary School, which is at the very north of Argyll and Bute. Our stage handover is at 18:19, and our stage is 12.5K long.

There are still a few gaps along the way, including immediately before us, so I have no idea how we’re going to get the baton!

We’re going to go for a recce on Saturday, and try to figure out how we’ll get ourselves from the finish to the car; or how we’ll get from the car (if we park it at the finish) to the starting point! I’m sure we’ll figure it out, but with no buses or trains, it’ll be a challenge 😉

We’re really looking forward to being part of such a brilliant event, and if you’re in the UK and haven’t signed up yet, visit the website  GBrelay.com

Any suggestions for how to manage the logistics? Have you signed up?

The events for 2014 continue to gather momentum in the TartanJogger/WelshWookie household: we’ve signed up for the GB Relay 2014!

The aim is to break the world record for the longest continuous relay, around the coast of Britain. Did someone say record attempt? We’re in!

The British coast has been split into 594 stages, and the run is done continuously, 24 hours a day, during June and July 2014.

@TheWelshWookie and I will be running stage 138, from Duror to Strath of Appin Primary School, which is at the very north of Argyll and Bute. Our stage is on 8th June, at 18:19, and our stage is 12.5K long.

We’re really looking forward to being part of such a brilliant event! For ore information, or to sign up, visit GBrelay.com

Has anyone else bagged a stage yet?